iPhone vs. Android: The Age-Old Battle 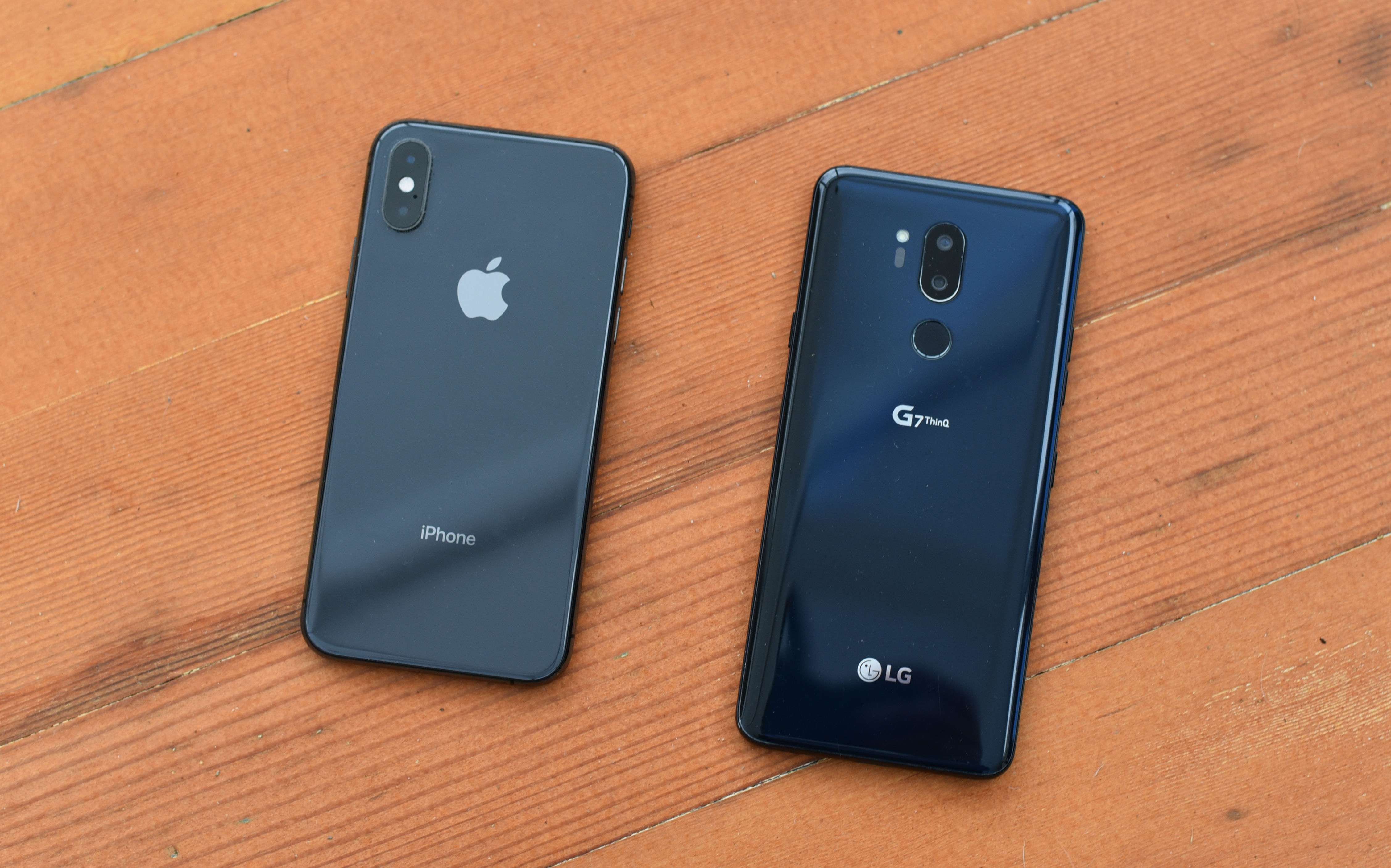 A long time ago in a galaxy far, far away the battle between iPhone and Android devices began. Seemingly at the beginning of time. In other words, 2008. Almost a dozen years ago! Like all great battles, people have chosen sides, they’ve stood their ground, they’ll fight to prove their phone is best. With the release of our Android version of TaxBird (cough, cough, tell your friends, cough), we thought it would be interesting to take a deeper look at iPhone and Android to see which reigns supreme.

For sake of this blog, we’re just going to keep it very simple and (mostly) unbiased. We’ll look at the operating system and manufacturer market shares to see how each is performing. Would I love to get into a debate about which one is easier to use or has better camera performance or allows for more of this or better control of that? No, not really. Just being honest. Plus, I’m a big Apple fan so I won’t believe those crazy opinions about Android being better anyway.

Let’s first get a quick understanding of the devices. iOS is the operating system used by Apple; Android is the operating system available from Google. So, what we’re really looking at when we compare iPhone to Android is the devices that run iOS compared to the devices that run Android. Apple keeps iOS exclusive to their devices, meaning the only phones that can run it are iPhones. Google’s Android is open source and available to many phone manufacturers including Samsung, HTC, LG, Motorola, Huawei, Oppo, and of course their own Pixels. With that in mind, let’s check out the market share of the operating systems and the phone manufacturers using data from Statista, StatCounter, and Counterpoint.

In the U.S., Android just barely edges out a lead in the operating system market with ~51.8%. Apple, at ~47.4%, is nipping at its heels though. That leaves under 2% of the market for the other operating systems – they’re essentially non-existent. I mean, just look how tiny that sliver is.  Those are like Hooli phones for you Silicon Valley fans. 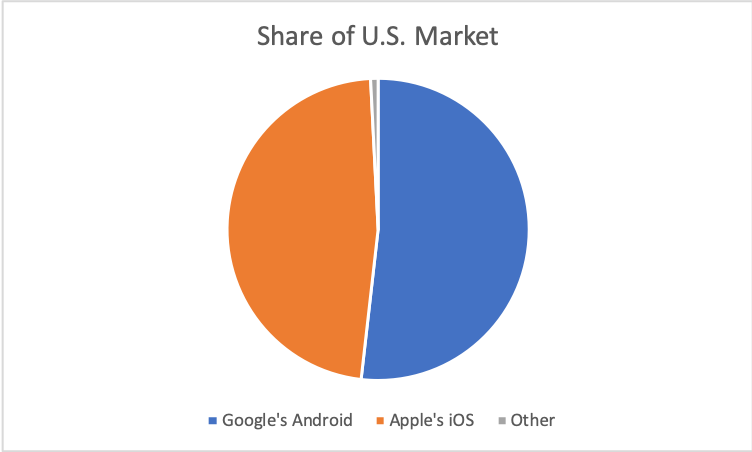 The manufacturer breakdown becomes a bit more interesting. The numbers here are based on the shipment of new phones so not directly aligned with the percentage of phones that are running the operating systems. Remember – iOS is only available on Apple devices. Apple makes up the largest share here by quite a bit at 41%. Samsung is second with 21%, LG is third with 13%, Lenovo (which includes Motorola) is fourth with 8%. All other manufacturers make up the remaining 17%. 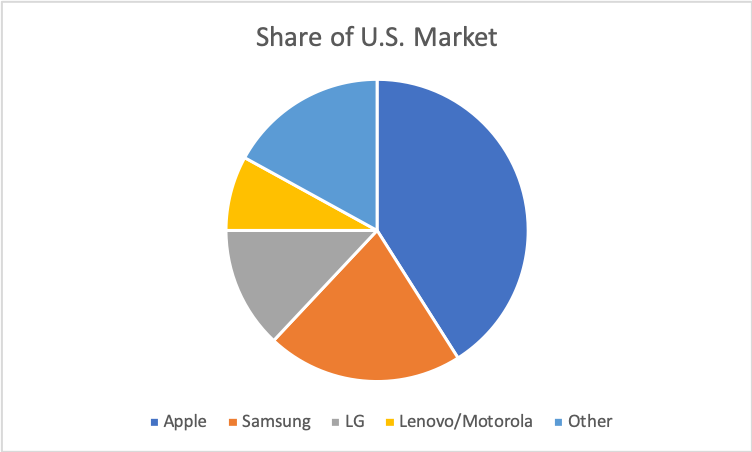 The global market share looks quite a bit different for operating systems. Android dominates. Android has ~76% of the global market while iOS only has ~23%. Outside of North America, Android has at least 72% of the market share for each continent. This is largely driven by the variety of phone options that run Android. There is an Android that seems to fit nearly every market. This is especially important for the international market where it helps that there is a wide range of low cost phone options running Android. 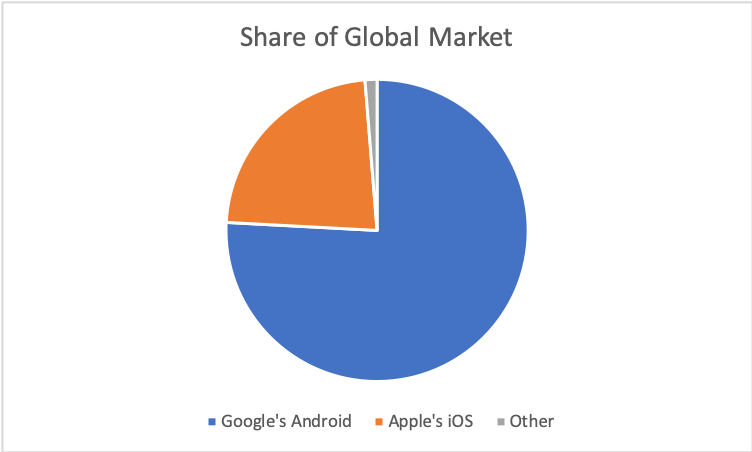 When we look at the manufacturer share globally, we see a few new players and some of them are quite substantial. Samsung is the top provider at 21%. Next, and the largest addition to the competitive landscape, is Huawei, a Chinese smartphone manufacturer, at 18% of the market. Apple, in third, still makes up 12%. The rest of the market is split between Oppo at 9%, Xiaomi and vivo at 8%, Realme at 3%, and all others making up the remaining 21%. 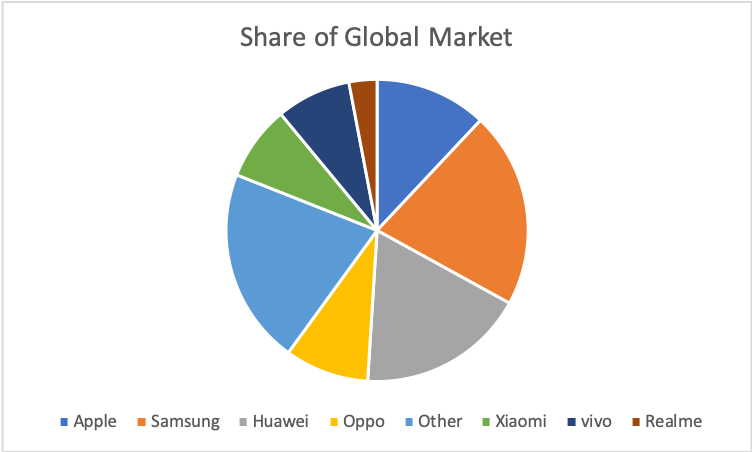 The operating systems are holding their current market shares fairly level at the moment, both in the US and worldwide. However, shipments of Apple devices are on the rise year over year, largely driven by the lower cost (relatively speaking) iPhone XR. So, iOS may begin to trend upward again, at least in the US. On the global level, everything appears to be holding fairly steady. That can change quickly though. Just this year Huawei was considering moving all phones to their own operating system, HarmonyOS, after limitations were put on the business by the current administration for security purposes. They have since decided to just replace the Google Mobile Services but keep running Android, you can read more about it here. That would have really shaken things up!

Sadly, I have to concede and say that Android reigns supreme. For now, at least. It will definitely be interesting to see what happens with the phone market and the operating system landscape over the next couple of years.

Sign up for email updates, notifications on new blog posts, and local events.

Ready to take flight with TaxBird?